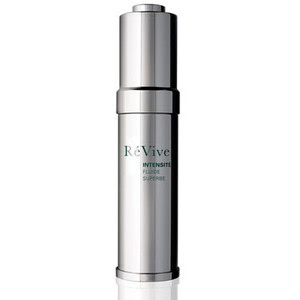 I want to review another face oil that I have used and that is Revive” Intensite Fluid Superbe.”
When my precious Ila oil was not available at Barneys anymore the salespeople were smart to
get me to sample other oils they stocked.  One of them was the Revive Intensite Fluid Superbe
which they were worried would evaporate if given in a small sample jar but decided to give me
enough for two days.  Well it worked because after the first application I knew it was “love at first
feel” and was amazed at how my skin felt moisturized, dewy and just soft to touch.

What makes this product different than the other oils I used was it belonged to the Revive family, a well known high tech skincare line.  Unlike other oils I have used this product not only conquered the problem with looking and feeling dry but it has Epidermal Growth Factor,  RéVive’s proprietary patented cell regenerator.  Some people feel strongly against using anything that is too high tech and advanced when it comes to skincare so Revive would definitely not be for you.  And there are others who want anything that is advanced or a newly discovered technology or ingredients to win their youth back…its really your call in what you decide.  I personally don’t mind experimenting to see how effective new discoveries are and with Revive they deliver what they promise(most of the time.)

Here are the my thought on this after purchasing it twice:

The verdict for me is as much as I loved it and it didn’t break me out its way too expensive!!!
As I mentioned the oil turns into a gel like consistency which makes it very hard to get out
and a lot of product is wasted.  I am surprised that no one has written to the company to complain
over this problem.  At $400 I would not expect this to happen.  Until they fix the formulation or packaging I wont be repurchasing it but if you really want to try it out then ask for a sample and decide if its worth the investment.  For now I will stick to Ila oil.