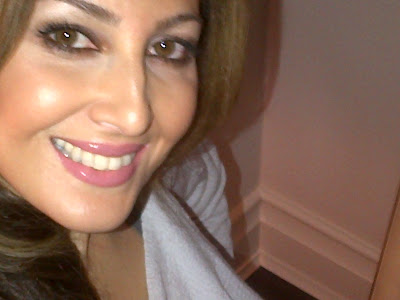 As promised I will start posting pictures of my makeup for the day followed by products used to achieve that look.  I hope to get better pictures soon when I buy a new camera but for now please
humor my low budget phone camera:)

Face  After prepping skin with Ila oil and Ysl primer I applied Laura Mercier mineral powder all over
For blush I used Givenchy’s new summer bronzer in “extreme”(review coming soon) and
on the apples used Chanel’s Jouses Contraste blush in #60 Rose temptation.
Eyes  I applied By Terry “touche veloute” as an eye primer before applying my shadows.
I then used a light grey/taupe shadow from Chanel’s prelude eye quad up to crease and layered
it by sweeping color twice on lid.
Next I used Cle de peau’s new summer shadow kit in #207(will review very soon) in the
gold brown in the crease 2/3 of the way.  I then used Laura Mercier’s caviar liner in chestnut to
line near lashes.  I went over that using Cle de peau’s darkest plum brown in the shadow quad
to smudge the caviar liner and help seal it.  I used a shimmery cream shadow from one of
Diors  last year summer color on brow bone.  I lined bottom of eyes with Le Metier de Beaute
pencil in sequoa and again went over it with Cle de peau’s plum/brown that was used to line
upper lid.
The eye look is completed with Helena Rubenstein’s (not available in the US sorry) lash queen
mascara in black.
Lips   I used Tom Fords lipstick in “pink dusk” and topped it off with Le Metier de Beaute lipgloss
in “vanilla rose.”